This morning I attended the last Tuesdayitis breakfast meeting with my Wynnum & Districts Chamber of Commerce comrades. As usual, we convened at the Wynnum Plaza, and this morning we enjoyed special Christmas treats provided by Heather & Les of Michel's Patisserie, as well as handing out our Secret Santa gifts (we used a raffle system...lot's of fun, particularly when a couple of us decided to nick someone else's gift!).

It has been such an honor to be welcomed into this very special group of people this year. I know Advanced Bookkeeping and Consulting wouldn't be where it is today were it not for the helpful insights and support they have given us.

So, once again my friends...thank you very much...and a Merry Merry Christmas!! 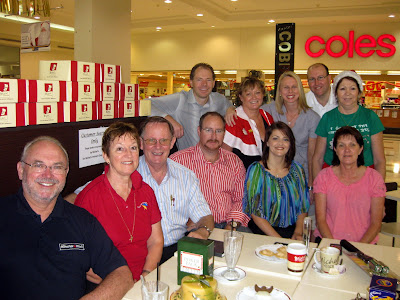 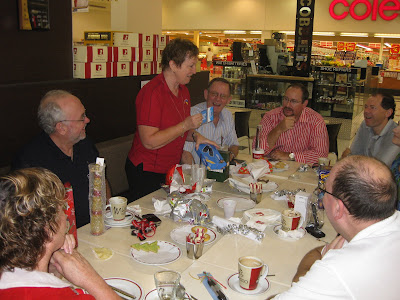 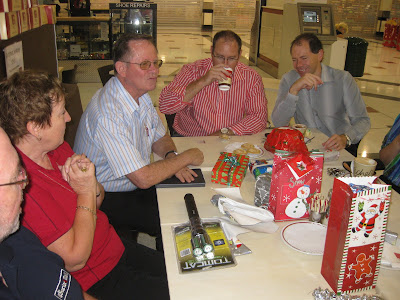 ~Sampling our Christmas treats and coffee at Michels Patisserie~ 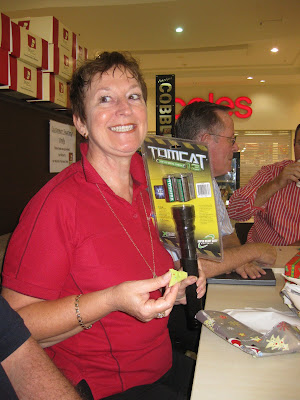 ~Lorraine McKay from Ink Jet & Laser with her Secret Santa Gift (which was later "stolen" by Michael from Wynnum Plaza!)~

Sammy
Posted by Sammy at 3:48 PM No comments:

This is just a reminder of a few things to be aware of, which are even more relevant at this time of year with all of the parties and presents....

"Entertainment Expenses" can be a tricky thing to figure out. They almost have to be judged on a case by case basis, but it's worth thinking about because in many circumstances, input tax credits on these items cannot be claimed, are not tax deductible and some may attract Fringe Benefits Tax.

While we are not in the business of providing tax advice, here are some general rules and things to consider:


Given the ambiguity of this type of expense, it is worth discussing with your Tax Advisor.

When we prepare your BAS we will ask you a few relevant questions to be sure input tax credits are claimed in the correct way.

Until next time...
Leesa & Samantha
Posted by Leesa Dalton at 1:11 PM No comments:

I attended another networking function this morning, and despite the particularly cool breeze gusting in off the beautiful bay near where I live, I was reminded of why I feel particularly special as a local business owner. The camaraderie between all of those who attended "The Kitchen Table Network- Wynnum Chapter" this morning was obvious, as well as inspiring and, well, fulfilling.

Of very recent times I have expressed to many people close to me of the wonderful feeling you get from really feeling like part of the local business community. It's like you feel more connected with those around you. It's truly amazing. And something quite unexpected.

Starting a small business has had many pluses...this is just one of them I thought I would share with you.

Talk to you soon.

Samantha
Posted by Sammy at 9:35 PM No comments:

Hi Everyone
Advanced Bookkeeping and Consulting Services now service the Sutherland Shire of Sydney. I am operating my office from Menai. Samantha has told me how rewarding it has been for her to feel in tune with the local business community in the Wynnum and Manly areas now that she has met and started working with other business owners. When you feel part of the community you want to support other local businesses in your day to day life. I am looking forward to doing the same in my local area. Hopefully I will find some wonderful networking groups just like the Kitchen Table Network and my local Chamber of Commerce.
Leesa
Posted by Leesa Dalton at 9:12 AM No comments:

Yes, it's the start of the New Financial Year. And what better time to make a decision that this year you will start off on the right track and be more in control of the finances.

Was last year a mess?

If you'd rather spend time developing your business and looking after your clients but you don't want to let the bookkeeping and finance side of things slip WE CAN HELP.

Give us a call or send an email and we can arrange a time for a free 1 hour consulation to discuss how you could benefit from our services.
Posted by Leesa Dalton at 2:06 PM No comments:

Well, it's here. The end of the financial year. Happy New Year?? Generally this seems to just make people think of all of the things they need to do and to worry about how much tax they will have to pay! The best thing to do before June 30 is BE ORGANISED.

Do things like: have all accounts reconciled as close as possible to 30 June so that you aren't reconciling 6 months worth of transactions before you can give it to your Accountant. Also, try and make sure you have little things like employees addresses and other details up to date to make preparation of PAYG Instalment Certificates easier.

You could also think about when to pay your expenses - should they be paid before 30 June to ensure they can be claimed as a deduction this year (which will help to reduce this year's income and therefore tax bill) or do you want to put them off until next year? Or should you defer receiving some of your income which would have the same effect?

Also, be aware of key dates such as when Superannuation payments must be paid by, when your quarterly or annual BAS is due and when your tax returns are due.

If you are worried about your tax bill it might be possible to ask your Accountant if your Tax Returns can be prepared a bit earlier and lodged as late as possible to give you a chance to prepare for the bill and avoid causing cashflow problems.

Hopefully the week will go smoothly for everyone. Of course, if you have any concerns be sure to give Samantha or I a call.

Leesa
Posted by Leesa Dalton at 3:00 PM No comments:

I really enjoyed attending my first KTN morning tea, and I found it to be an excellent forum for networking. My "mug" even ended up on the KTN e-newsletter! As a result of the morning tea Advanced Bookkeeping and Consulting Services will become a member of the KTN and enjoy the benefits membership has to offer.

For more information on the Kitchen Table Network follow the link and try it yourself.
Posted by Sammy at 1:32 PM 1 comment:

Last Thursday (28th May) I went to my first networking event. It was run by the Brisbane Central Leads Club, and it gave me the opportunity to meet and "network" with other business owners.

The evening confirmed what Tony Carter from the Wynnum Chamber of Commerce advised me during our meeting on Wednesday 20th May, that 80% to 90% of business is drummed up through networking.

Various members of the leads club explained to me that most of their clients are derived from various forms of networking...weather it was from organised networking functions, or simple word-of-mouth. It was made pretty clear to me that the benefits of becoming a member of a networking group are enormous!

So, what is networking?

Well, I've only been to one event, so I am no expert, but basically it's a forum where people in business come together and discuss who they are and what they do. It's an opportunity for professionals from just about any industry from your local hairdresser to the solicitor to introduce themselves, and their business, in the hopes of gaining referals.

It is also facilitates knowledge sharing. This is also a major benefit of joining a networking group because like they say "a problem shared is a problem halved".

My next networking event is on 11th June with the The Kitchen Table Network, which is basically a womens networking group. I am really looking forward to this one. I will let you know how it goes...

Regards
Sam
Posted by Sammy at 10:17 PM No comments:

It is always exciting (and a little nerve wracking) to start a new business. But my best friend, Leesa, and I have been talking about this venture for years now so we decided to stop talking about it and to just go for it!

Samantha's Advanced Bookkeeping and Consulting Services (SABCS) specialise in assisting both new and existing small-to-medium enterprises (SME's) will all of their bookkeeping and financial data management nees.

My business partner, Leesa, and I know that a business with a sound and reliable financial data system is a powerful one. As such, it is our aim to provide SME's with a professional holistic service that, at least from a financial data perspective, you are in control.

In short, we believe that it makes Good Business Sense to take advantage of the range of services offered by SABCS. By doing so, the business owner can concentrate on their core business, while we take care of all of your financial data needs.

We are looking forward to hearing from you...